Two spotted spider mite, (also called red spider mite) is a major pest in vegetable, fruit, flower and ornamental crops both indoors and outdoors all over the world.

The eggs of the spider mite can mostly be found on the underside of the leaf. They are round, have a diameter of about 0.14 mm and are transparent in color just after being laid. Later they become opaque. By the time the larva emerges the egg is straw-colored. Larvae have three pairs of legs and at emergence are colorless with two dark red eyes. After they have eaten their color changes to light green, brownish yellow or dark green. At that stage two dark spots appear in the middle of the body.

Protonymphs have four pairs of legs and are slightly bigger than the larvae. Their color varies from light to deep green. Their two body spots are bigger and clearer than on the larvae. After a period of eating, the protonymph rests and then develops into a deutonymph. This nymph is bigger, but has a similar coloring to the protonymph. Once it has become a deutonymph, differences can be seen between males and females. An adult mite develops from the deutonymph once it has had a feeding and a resting stage.

The adult female two spotted mite is oval-shaped and rounded at the rear. The color can vary from orange, light yellow or light green to dark green, reddish brown or even black. The male is more active than the female. His body is smaller and more pointed at the rear. His coloring varies from light yellow or orange to dark yellow or brown. Often the color of adult mites depends on the crop on which they occur. For example, the mite may be yellowish brown on cucumber, but reddish brown on tomato. Both males and females usually have two large black spots on each side of the body, which can vary in size and shape. In summer the female can be a bright red colour, and there can also be an orange overwintering form.

A spider mite population consists of about 75% females and 25% males.

Depending on the temperature it takes 0.5 to 3 days for the female to start depositing eggs. The number of eggs she lays per day and the number of days she produces eggs depends on a number of factors:

Under ideal conditions a female can lay more than 100 eggs.

All life stages of two spotted mites (except eggs) can cause damage to the plant. Mites mostly appear on the underside of the leaves where they pierce plant cells and suck out their contents. Those cells then turn yellow, and on many plants the damage caused by the mites can be seen on the upper surface of the leaf as small white yellow spots. With increasing damage the leaves turn completely yellow. With the photosynthetic area gone the leaf dies and the whole plant can eventually die. Nymphs and adults also produce webs. If large numbers of mites are present, the plant can be covered completely with webs which are swarming with mites.

For plants this can have the following effects:

Measures like fertilisation and pruning to improve crop growth can also improve the quality of the food source, and thus promote faster reproduction of the pest.

Because of it's fast development, high reproduction rate and pressure from chemicals, two spotted mites are able to quickly develop resistance to many miticides.

The regular use of pesticides can inhibit the use of natural enemies and in the case of some insecticides such as Imidacloprid actually increase the egg laying capacity and reproduction rate of two spotted mites. Climate control (e.g. low humidity for the prevention of mildew in greenhouse roses/cucumbers) can inhibit the effectiveness of natural enemies, allowing pest numbers to spike.

Two spotted mites can infest the crop in several ways. 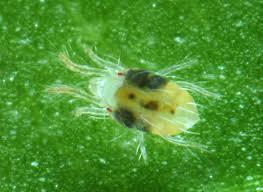