Research and development is a critical part of any business. It is an ongoing daily process in our business and also encompasses quality control. We are constantly reviewing procedures for all the organisms we produce. This may be as simple as adjusting temperatures or humidity to suit seasonal conditions or trialling new plants or diets for the prey cultures.

The launching of a new biocontrol organism for commercial mass release into crops is a much more complicated process.

Investigation into a new biocontrol product commences with:

If all of these considerations (and more) are satisfied the complicated tasks of initiating cultures might commence. If the new organisms can be successfully reared, R&D then needs to develop techniques for the following:

Every individual organism requires different techniques. From initial investigations to the point where in-field trials might commence generally takes 2-5 years. If initial field trials are promising and the organism can be reared and handled successfully, another 1-3 years could elapse before a commercial product is ready for market.

Our R&D program and quality control procedures are overseen by Juan Sorrequieta, under the supervision of the Biological Services Managing Directors.

Juan gained his degree as an Agronomist Engineer in 2010 from the National University of Rosario in Argentina where he also worked as an assistant teacher in Biology.  During his degree Juan always had an interest in biological control and entomology but his main project was researching invitro tissue cultivation of native tree species. After gaining his degree Juan undertook post graduate courses such as statistics, experiment design and invitro tissue cultivation.

In 2015 Juan joined the Biological Services team and has helped to improve the efficiency and effectiveness of the breeding of a number of different species, including Nesidiocoris tenuis, Orius tantillus, and Thripobius javae. He is also responsible for quality control of production at the Muchea Site.

Juan has been involved in a number of Biological Services research projects, the most recent being the efficacy of 5 different chemicals and 3 biological control agents for the control of Tomato Potato Psyllid, Bactericera cockerelli in tomatoes, capsicums and potatoes. The research is now complete, and a final report will be available soon. 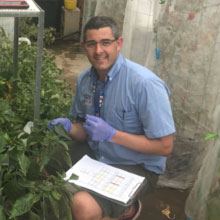 Thripobius javae is a native Australian wasp species that attacks Greenhouse thrips (Heliothrips haemorrhoidalis).  This thrip is known as a significant pest of Avocados in other countries including Southern California where colonies of Thripobius were established from Australian collections by Dr Andrew Beattie in 1986.

Greenhouse thrips has caused spasmodic damage to Avocados in the Pemberton district of Western Australia (WA).  The WA Department of Agriculture in conjunction with Biological Services have been working together to release and establish Thripobius javae in any orchards with known infections.  Dr Andrew Beattie was again able to collect a colony of Thripobius pupae on the East coast, which were sent for culturing to Biological Services laboratories in WA during 2017.  Releases of parasites commenced in 2018 and will continue throughout 2019.

Greenhouse thrips are also pests of a range of other plants in warm humid environments including Camelia, Citrus, Coffee, Cymbidiums, Ficus, Macadamia, Mango, Viburnum and many other ornamental plants.

Small numbers of Thripobius are now available for inoculations into crops where required.  Contact the office if you are interested in this species.

This native predatory mite is well known as a predator of pest mites in grapevines.  Dr David James (1992-94) and Dr Martina Bernard (2006-08), both found this species to be the most prudent and widely distributed predator in wine grapes throughout Southern Australia.
James Altmann also found it in Almonds whilst studying Bryobia mite lifecycles in 1988, but at the time, was not able to be mass reared.  Other collections have also come from pome and stone fruits feeding on Bryobia mites and Rust mites.

Colonies of this predator have been procured from wine grapes in the Riverland and apples from the Adelaide Hills, in South Australia during 2017.  Newer techniques for the rearing of some other mite predators has proved successful, and this key predator is now ready for release into field trials.  To date, efforts to find a funding body interested in doing field research on establishment after release has been frustrating, but any growers interested in trialing this predator can contact the office to discuss release into their crops.

Small scale trials into greenhouse vegetable crops appear to have had some success with broad mite control.  This will need to be confirmed, but it could be very useful as this mite can tolerate hot/dry conditions and a range of pesticide residues.

This predator is also native to Australia and is thought to be synonymous with A.limonicus that is widely used for thrips and whitefly control in European greenhouses.  It was collected and studied by Marylin Steiner from the NSW Department of Agriculture in 1998 and touted as a key potential biocontrol agent.  Unfortunately, at this time mass rearing was difficult and no further work on this species was conducted.

We have been collecting colonies from the field on the East coast and in Western Australia since 2016.  Biological Services Research & Development Staff have been working on suitable rearing methods for some time and have recently established a culture for several months.  It is unknown how well this predator will perform in the field and whether there are enough crop uses to make A.lailae a commercial line.  However, any growers of ornamental plants or fruit crops with thrip and/or whitefly infections in mild temperate climates might like to try this predator – especially where other attempts of biocontrol releases have not been successful.  Overseas, A.limonicus is mostly used in roses, cucumbers, some berry crops and capsicums, where a constant pollen source is available.

Our products are alive. They need to breathe, and during transit need to be kept cool so they arrive in good condition. Over several years we have been working on finding containers that can retain humidity, but allow air exchange particularly for our predatory mite products. We also want ease of distribution once growers receive the product and to hopefully speed up the packaging process by automating the packaging line. We have recently commissioned some machinery to automatically fill and cap cylinders. We are also working on techniques to rear the predators in higher concentrations. If successful this will allow us to deliver more predators in smaller parcels and reduce the costs of freight. Trials are continuing and hopefully this packaging will be ready for launch in July 2015. 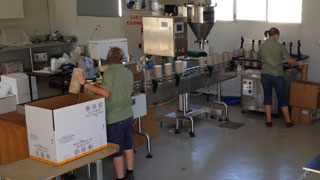 Due to the importance we place on quality control, we have one person employed full time to check cultures on a weekly basis and to assist in other research projects. All of our products are checked weekly to determine culture concentrations and purity. IOBC guidelines for product quality are used as a starting point for our internal QC, and regular experiments are conducted to strive for better rearing systems. QC plays an important role in assessing the R&D experiments. 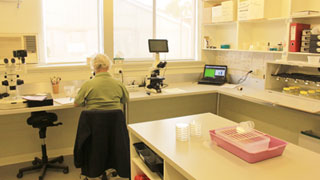