Cucumbers have quite a short crop cycle compared to other greenhouse crops—somewhere between 12-16 weeks in most instances. Where pest levels are low, cucumber crops may not need much spraying for pests at all. However they are highly attractive to a range of pests including thrips, two spotted mite, whiteflies and aphids. Where consecutive crops are grown on the same property these pests can persist and move from one crop to the next, causing a lot of problems. Young cucumber seedlings are also very sensitive to attack from fungus gnats in the root zone, making them susceptible to root diseases such as pythium and phytophthora. Biological Services cucumber IPM program supplies preventative products for all of these pests starting from the first day of planting. This helps get on top of pests early so that there is less chance for pests to build up, and a reduced need for pesticide applications. Good control in one crop tends to reduce the problems in the next one. Therefore high populations of pests do not travel to the new crop from the old one quite as much.

Western flower thrips (WFT) is the most problematic thrips species. In green skins, apple and Lebanese varieties, WFT do not cause much damage to fruit, but in continental varieties small feeding marks on fruit developing in the head of the plant prior to bloom will lead to bending of fruit making them unsaleable. The IPM program for WFT in continentals requires a banker plant system of flowering basil to establish Orius tantillus (Orius) which inhabit the basil flowers. Thrips are attracted to the white scented basil flowers and Orius will control all that enter their vicinity. Orius will move from the basil to the cucumber plants to feed on pests, but it is not a favoured plant for their development as cucumber flowers do not produce pollen for them to feed on. Whilst it is still recommended to use basil bankers in other cucumber varieties especially in areas where thrips pressure is high, it is not essential. The main control for thrips in cucumbers is Cucumeris. Depending on thrips pressure between 2 and 5 applications may be advised about 2 weeks apart starting 1-2 weeks after planting. Regular releases are required as Cucumeris also breed better and persist better on plants with a suitable pollen source. Cucumeris predatory mites should be released on newly expanded leaves near the head of the plant, so that they settle in the unfolding buds where the newly hatched thrips feed on the young plant tissues. Our program also uses Hypoaspis for fungus gnat suppression, but these predators also feed on thrips when they drop to the soil to pupate.

TSM breed well on cucumbers. Like other greenhouse crops, Persimilis is the main control. Several releases of Persimilis are advised starting at 2 weeks after planting and continuing fortnightly until predators are well established.

The cotton or melon aphid (Aphis gossypii) is the main species that attacks cucurbits. Aphidius colemani (Aphidius) is an excellent and fast acting parasite of this aphid species. Female Aphidius wasps will lay over 100 eggs mostly soon after they emerge as adults. Generations occur every 10-14 days depending on temperature so the wasps can get on top of aphid colonies very quickly. The key to good control is to release low numbers of wasps regularly in the early crop stages prior to aphid establishment.

As cucumbers are a short crop it is essential to release parasites early to get the best effect. Encarsia formosa (Encarsia) and Eretmocerus warrae (Eretmocerus) are both included in our programs.

10 bottles (2,000/bottle)/ha in week 3 and 5. Release half onto banker plants and the remainder evenly through the crop. 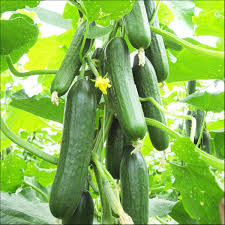