Cotton aphids are major pests (as the name suggests) of cotton, melon and other cucurbits, and many ornamentals crops. Worldwide, the species Aphis gossypii consists of an unknown number of strains that do not change their host and some strains that have a unique relationship with their host. For example in the UK, cotton aphids occur on chrysanthemum and cucumber. The strain that occurs on chrysanthemum does not occur on cucumber or vice versa. Both strains, however, can develop on cotton. The strain that occurs on chrysanthemum is resistant to organophos-phate and carbamate insecticides, but the one that lives on cucumber is not.

Cotton aphids are distinguished from other aphids by the colour of two projections on their abdomens (siphunculi), These siphunculi are always black, no matter what colour their body is (figure 6.3). Body colour varies from light yellow to greenish black, depending on the temperature, the food source and population density. Large specimens are mostly dark green to black, while aphids produced in overcrowded colonies at high temperatures can be small and yellow or yellowish white. They measure 1-2 mm long and have relatively short antennae (about half the body length), and red eyes.

Adult cotton aphids live for two to three weeks and produce three to ten young aphids a day. A. gossypii can multiply itself four times (in aubergine) to twelve times (in cucumber) in seven days.

Cotton aphids are important carriers of viruses, transmitting at least 44, such as cucumber mosaic virus. The cotton aphid may also cause damage in the same way as other aphids: by sucking plant sap, secreting hon-eydew and depositing toxic substances. The species has a preference for the underside of leaves and young tissue. Cotton aphids are controlled by Aphidius colemani (Aphidius). 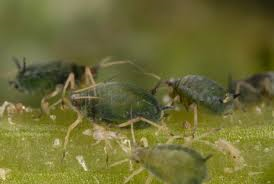