Dalotia coriaria (Dalotia or Rove beetles) are soil dwelling beetles. They are a generalist predator that feeds on a wide range of small insects and mites but is primarily an egg predator. It is harmless to plants and humans. Dalotia can give excellent control of fungus gnats and shoreflies. Dalotia will also prey on moth flies, root mealy bugs, springtails, cabbage root flies and carrot flies.

Adult Dalotia are 3-4mm long, glossy black slender beetles. Larvae are creamy white when small and pale brown when larger. All stages move rapidly in the soil when disturbed. A characteristic of this beetle group is that the adult curves its abdomen up-wards like a scorpion when running or disturbed. The optimum temperature for development is 25-27°C. At this temperature the population doubles every 5-6 days. Adult females can live up to 21 days, laying an average of 8 eggs per day during the peak egg laying period. Dalotia will continue to reproduce at average temperatures of 15°C but are less likely to lay eggs when the average temperature drops below 10°C. An adult Dalotia can consume up to 150 sciarid eggs in one day. The main targets for Dalotia are fungus gnat and shore fly eggs and larvae. They also feed on western flower thrips larvae and pupae, and on other fly and beetle eggs e.g. house fly and Carpophilus beetle in laboratory experiments.

Dalotia are suitable for greenhouse vegetables, potted plants, bedding plants, propagation areas and hydroponic crops. They can adapt to a variety of media as long as it is moist and food is available. A warm, humid environment is preferred. Dalotia can be very effective if there are "puddles" or "free water" in the growing area. They are therefore a good companion to Hypoaspis releases which will not tolerate water saturated areas. Dalotia can be used in both indoor and outdoor crops.

The use of Dalotia is most successful when incorporated into an IPM program. Early and repeated introductions at low pest numbers is the most effective option. Dalotia can be used in both indoor and outdoor crops. Dalotia should be used in conjunction with Hypoaspis species which also aid in control of fungus gnats and thrips pupae in the soil.

Dalotia are shipped in a cocopeat and vermiculite mix which contains a minimum of 1000 beetles of all life stages per litre. As beetles fly actively, do not open the container until in the greenhouse. To apply, gently shake/roll the container several times to mix the contents well. Then spoon 10-25mL of the cocopeat/vermiculite mix in small piles onto the surface of the growing medium in hotspot areas. For best results apply immediately on receipt unless temperatures are extreme.

Adult Dalotia and sciarid fly numbers can be monitored in the crop using yellow sticky traps. Fungus gnat larvae can be monitored by placing slices of raw potato, cut side down onto the growing media. The potato slices will attract sciarid and Dalotia larvae and the larvae can then be counted.

Ideally Dalotia should be released soon after planting at a rate of 25 bottles/ha applied in at least two introductions, 7 days apart. Hotspots should be treated with 50ml of media /m². If wanting to help control cabbage root flies or carrot flies, apply Dalotia to seedling trays before planting out into the field.

Dalotia should be distributed through the crop as soon as they arrive. However, if immediate distribution is not possible, they may be stored in a dark area between 8-12°C for 1-2 days.

Dalotia are sensitive to many pesticides, particularly pyrethroids, organophosphates and neonicotinoids. Residues on foliage and greenhouse structures may remain toxic for many weeks and negatively impact on their survival and ability to effect control. Check side-effects charts carefully and avoid using pesticides before and during Dalotia use unless they are known to be safe. Contact Biological Services for specific information. 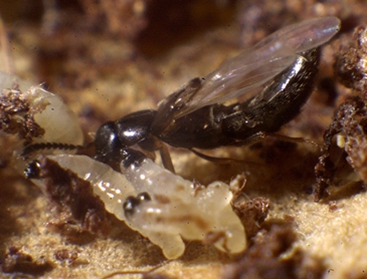