The main pest of greenhouse tomatoes is greenhouse whitefly. Good control of this pest worldwide has been achieved worldwide with the use of Encarsia formosa (Encarsia) since the 1920s. Average 24 hour temperatures need to be over 18°C for Encarsia to breed faster than the whiteflies. In recent times, modern greenhouse growing of tomatoes has adopted a method of heavy leaf removal for increased production of many varieties. This process has reduced the effectiveness of using Encarsia alone to control whiteflies in this crop.

Biological Services has been actively searching for beneficials to aid in whitefly control for a decade. We now rear Eretmocerus warrae (Eretmocerus), a native whitefly parasite that is a strong flier, is able to withstand higher temperatures, and is a little more tolerant of some pesticides than Encarsia. In 2012 we were also able to collect the predatory mirid Nesidiocoris tenuis from an outdoor tomato crop in Victoria. This predator is widely used in the southern Mediterranean area in greenhouses for control of Tuta absoluta and whiteflies.

Nesidiocoris has been present in Australia for many years but until recently was difficult to find in crops probably because it is very sensitive to pesticides. A rearing system was developed and field trials commenced in September 2013. To date this predator has proven highly effective against whitefly and once well established, we have no longer noted the spasmodic outbreaks of TSM, so believe it is helping control this pest also. Nesidiocoris also feeds on moth eggs, young caterpillars and thrips. A drawback is that Nesidiocoris also feed on plant tissue. Whilst they preferentially feed on pests, they do draw moisture from the plant. When their numbers are high and pests are low, some plant damage can occur. This is particularly so in hot weather conditions. Some varieties are also more sensitive to damage than others. Selective pesticides at certain rates can be applied to reduce Nesidiocoris without lowering their populations completely. If they need to be eliminated they are very sensitive to most broad-spectrum insecticides.

Growers using Nesidiocoris are required to sign an indemnity form which states they understand this insect will feed on the crop and that Biological Services are not responsible for any damage it may cause.

Tomato russet mite, two spotted mite, tomato fruit worm (Helicoverpa spp.) green loopers, thrips, fungus gnats. IPM compatibile controls are are available for most pests, however prior to control of any pest consult your Biological Services advisor to ensure the intended control is coompatible with the IPM program.

A single application is generally sufficient but depending on evenness of establishment and pest pressure, some top up releases may be required. 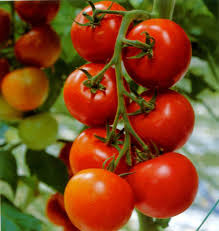