Eretmocerus warrae is a parasitoid wasp which attacks whiteflies, particularly greenhouse whitefly (Trialeurodes vaporariorum). It also predates non-parasitised stages. It does not attack silverleaf whitefly (Bemisia tabaci). Eretmocerus is tolerant of a wide range of temperatures and relative humidity, and is particularly useful in summer where very hot conditions are experienced which are less conducive to Encarsia development. They are also more tolerant to some pesticides than many other parasites.

Eretmocerus are about 1mm long (a little larger than Encarsia), and completely yellow except for three distinctive red ocelli (eye spots) on the top of the head arranged in a triangle, and green compound eyes. They are winged and can travel several hundred metres in a day, possibly wind assisted. Males are very rare. The female prefers 2nd stage whitefly nymphs for egg laying, depositing a single egg in the ventral surface of the whitefly nymph. On hatching, after about 4 days, the wasp larva bores into the whitefly and waits until the whitefly pupates. It then releases digestive enzymes which dissolve the whitefly innards which the wasp larvae feeds on. There are three larval stages, with development from egg to adult taking about 10-30 days, depending on temperature. The yellow body of the final pupal stage with red to green eyes is visible within the whitefly shell. Unlike Encarsia, the whitefly body turns a light yellow rather than black making establishment a little harder to monitor. The adult parasitoid cuts a circular hole in the upper shell upon emergence. Eggs are laid early in the life of the female (about 150 in total), which lives only 1-2 weeks. Host feeding on non-parasitised whitefly nymphs is an important source of nutrients for the female and contributes to control of the whitefly.

Eretmocerus can be used on all crops where greenhouse whitefly is present, and should be better suited to those with more hairs on the lower leaf surface than Encarsia. Target crops include greenhouse vegetables (tomato, cucumber, eggplant), ornamentals (gerbera, chrysanthemum, rose), strawberries and herbs. In summer and in warmer climates they will also be useful in outdoor nursery stock and gardens. Eretmocerus should be used in conjunction with Encarsia formosa. In tomato/eggplants, Nesidiocoris tenuis should also be used for best control of whiteflies.

Eretmocerus works best when used preventatively, or when whiteflies are first noticed in the crop. If whitefly numbers are already high it is advisable to use a non-disruptive insecticide to lower the whitefly population density prior to release. Residual broad spectrum insecticides should not be used for at least four weeks prior to release, or during establishment.

Eretmocerus are sent as loose pupae in plastic vials (1000 +/vial). They can be sprinkled over the top of foliage in soil grown crops, or in hydroponics, open the vial and leave it resting sideways on the slab in the shade. Do not place vials/pupae on the ground or pupae may be eaten by ants. If ants are present, try to control them with baits prior to and during release periods. Eretmocerus should be concentrated into known hotspots and distributed around the extremities of the crop. They are strong flyers so do not need to be placed evenly like Encarsia which can only fly short distances.

Rates will vary depending on the crop and time of year. Eretmocerus should be distributed evenly around the extremities of the crop and also concentrated into known hotspots.

Preventative: 0.5-1/m² weekly.
After whitefly detection: 2-3/m² weekly for at least 4 applications, or apply higher rates in hot-spots until parasitisation is at least 80%.
Hotspots: release 10/m².

Eretmocerus should be released as soon as received, but if not store at 8-10°C for 1-2 days only.

Eretmocerus has shown tolerance to many pesticides and can re-establish more quickly than many other parasites after pesticide use. However pyrethroids, organophosphate and neonicotinoids with long residual actions are detrimental. Check side-effects charts carefully and avoid using toxic pesticides at least 4 weeks before and during Eretmocerus use unless they are known to be safe. Contact Biological Services for specific information. 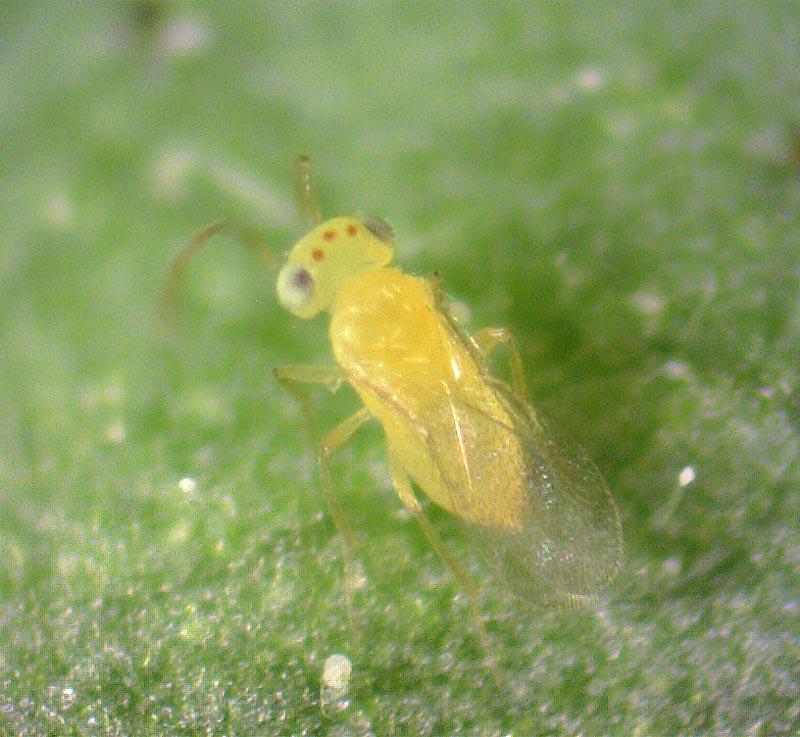