Neoseiulus californicus (Californicus) is a predatory mite which primarily attacks spider mites but also feeds more generally on many leaf inhabiting mites, other small insects and pollen. It closely resembles N. wearnei, and may be the same species. It is tolerant and active at both high and low temperatures, and low humidity, but prefers warm to hot conditions where it can reproduce very quickly.

Neoseiulus californicus is <1mm long, pear-shaped and buff to tan. It is similar in appearance to N. cucumeris. Males are much smaller and darker brown than females, with females generally more numerous. The female lays oval, clear whitish eggs singly or in groups on leaf undersides, often on leaf hairs or at the junction of veins. The eggs are larger than those of spider mites. They hatch after 1-2 days and pass through a 6-legged larval and two 8-legged nymphal stages to adulthood. The life-cycle from egg to adult is temperature dependent but in greenhouse conditions ranges from 4-10 days. The adult female lives approximately 20 days and lays 3 eggs per day, beginning after 2-3 days. Pollen is a subsistence diet only, but can help establishment and persistence in the crop when pests are low. In the absence of food, predators disperse over the crop and on the ground searching for new prey, but many will stay in the crop and await the arrival of new prey.

Californicus can be used on a broad range of crops. Suitable crops include vegetables (capsicum, eggplant, cucumber), ornamentals (gerbera, chrysanthemum, rose), and herbs. It is often used in greenhouse production, but can also be used in the field, particularly fruit crops such as melons, strawberries, pome and stone fruit.

Californicus works best when used preventatively, or when spider mites are first noticed in the crop. It is best established early in the crop and allowed to build up before spider mites establish. Phytoseiulus persimilis should be used for faster knockdown of spider mites during moderate temperature and high humidity conditions, but where conditions are known to be hot/dry later in the year it is suggested to release and establish both species early in the crop cycle. If spider mite numbers are already high it is advisable to use a non-disruptive miticide to lower the population prior to release, or after establishment to aid control. Use N. cucumeris preferentially for broad and cyclamen mite, though N. californicus will assist in control and may be more effective at higher temperatures. Residual broad spectrum insecticides should not be used for at least four weeks prior to release.

Californicus are sent in a loose, vermiculite-based medium in units of 100,000 predators. The predators should be distributed evenly through the crop on foliage, with additional material at ends of rows and in hotter areas prone to spider mites. They should be released as soon as possible once received. Slow-release sachets containing breeding populations are used overseas and it is hoped to have these available in the future.

Rates will vary depending on the crop and infestation level. Contact Biological Services for crop-specific recommendations. The following rates have been determined overseas for Californicus.

Californicus appears to be hardier than other predatory mites and may re-establish more quickly after toxic pesticide use, but is still sensitive to those with long residual actions, particularly pyrethroids, organophosphates and neonicotinoids. Residues on foliage may remain toxic for many weeks and negatively impact on their survival and ability to effect control. Check side-effects charts carefully and avoid using pesticides before and during Californicus use unless they are known to be safe. Contact Biological Services for specific information.

Orders are sent via express courier services on Monday or Tuesday of each week, and usually arrive within a couple of days. Orders received after noon on Tuesday are sent the following Monday. Prices are on a sliding scale i.e. the more that is purchased over a monthly period, the lower the price will be per unit. Freight is charged at cost. 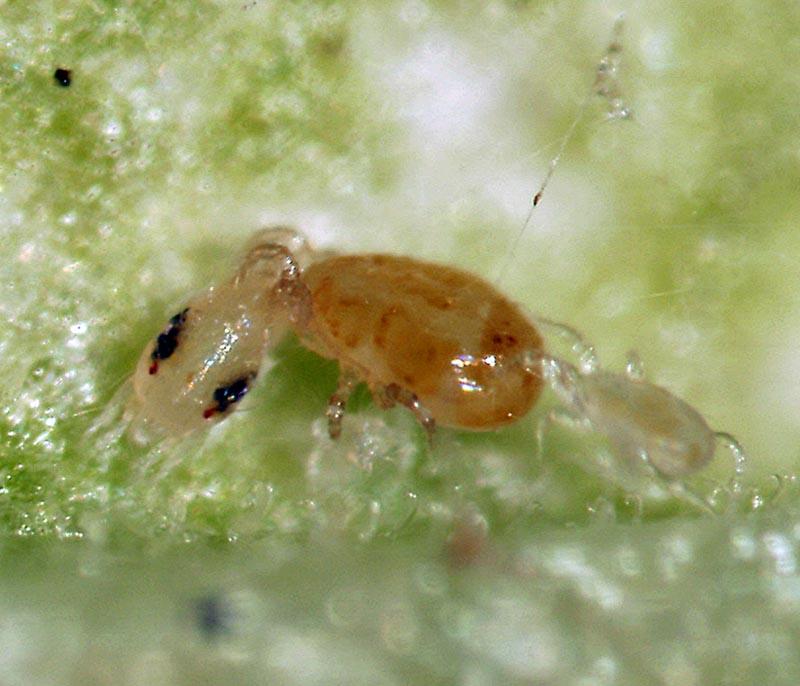