A wide range of hosts are attacked, including many tropical and subtropical fruit, cotton, greenhouse crops such as capsicums, eggplants, chillies and ornamentals. Broadleaf weeds are a significant source of infestations in orchards.

In lemons it causes a silvering of immature fruit. Normally fruit on the shady side and within the tree canopy are the most affected. Damaged fruit take on a silvery white to pale yellow-brown scab-like appearance. The mites also attack the leaves, usually those close to the growing point. Damaged leaves are curled and twisted, sometimes to such an extent that the growing point remains undeveloped.

In capsicums and eggplants, P. latus attacks the young buds with succulent leaves, causing the latter to curl and eventually fall off. On the undersurface of infested leaves corky brown patches may occur.

The adult female mite is white or pale yellow, oval-shaped and 0.2 mm long. The male is smaller, with longer hindlegs, and is more active. A distinguishing feature of broad mite is the male's habit of carrying pre-adult females on their backs in a "T" shape until they are sexually mature. Another identifying characteristic is the appearance of the eggs, which are dome shaped, translucent, and covered with white 'studs' or tubercles.

Development from egg to adult can take 4 to 5 days in summer and 7 to 10 days in winter, so there can be between 20-30 generations per year. The female lives about 14 days, during which time she can produce over 40 eggs. The eggs are laid in in-dentations on the leaf or on the fruit surface and are attached by their base. These mites thrive in warm humid conditions. The females and larvae do not normally walk from one leaf to another but the males carry the sedentary females from damaged to undamaged leaves and fruits.

Broad mite can be spread by other associated flying pests such as whiteflies. 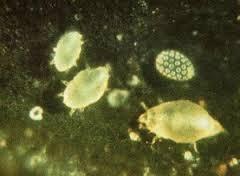