Encarsia is a parasitic wasp used worldwide for the biological control of greenhouse whitefly (Trialeurodes vaporariorum), on vegetables and ornamentals. Whitefly adults and nymphs cause damage by sucking sap from plants and excreting honeydew which in turn develops into sooty mould. Encarsia can also parasitise silverleaf whitefly (Bemisia tabaci) but will not attack Ash whitefly.

Encarsia lay their eggs inside whitefly nymphs. When the Encarsia egg hatches, the wasp larva feeds inside the whitefly nymph causing its death. The developing larva pupates inside the whitefly scale turning it black. After several days a new adult wasp emerges from the black scale to complete the cycle. Adult females have a black head and thorax, with a yellow abdomen and are about 1mm long. Nearly all adult wasps are female (>99%). The development time from egg to new adult wasp varies from 31 days at 18°C to 10 days at 30°C. Development does not occur below 10°C and temperatures above 38°C may kill wasp larvae.

Adult Encarsia also kill whitefly nymphs by feeding on them (host feeding). Encarsia live 15-39 days and will lay up to 300 eggs during their life.

Encarsia can be introduced into all crops attacked by greenhouse whitefly. These include tomatoes, capsicums, cucumbers, eggplants and a wide range of nursery, ornamental and broad-acre crops. Encarsia is most effective when used in greenhouses, but can be effective outside depending on climatic conditions and pest numbers. Encarsia should be used in conjunction with Eretmocerus warrae especially in hotter conditions. Eretmocerus are also more tolerant of some pesticides. In tomato/eggplant crops Nesidiocoris tenuis should also be used with parasites for best results.

For best results start releasing Encarsia at the start of each new crop, as a preventative measure. Alternatively, monitor whitefly levels using yellow sticky traps and start releasing Encarsia at the very first signs of whitefly. Continue weekly releases until suitable parasitism occurs (at least 80%). If possible adjust temperatures to 23-27°C, and humidity to 50-70%, and adjust lighting to a minimum of 10 hours to favour Encarsia development.

Encarsia are supplied as 100 pupae stuck on cardboard tags. Do not open Encarsia packages until you are inside the greenhouse as some wasps may have hatched in transit. Separate the tags being careful not to touch the circle containing the black pupae to avoid damaging them. Tags should be hung out of full sunlight on leaf stems in the crop, about 750mm down from the head of the plant in layered crops such as tomatoes.

The above rates should be released weekly for a minimum of 12 weeks or continued until at least 80% of whitefly nymphs are parasitized. This will cover three generations of whitefly. Rates should also be doubled for hairy plants (e.g. cucumber) or where silverleaf whitefly is present. Monitor plants at least once a week, checking the underside of fully expanded leaves. Parasitised nymphs turn black, and should be present within 6 weeks of your first release. Good control can be achieved within 3 months. A minimum of 16 leaves below the flowering truss are required on a tomato plant for Encarsia to go through it's full life cycle. Any less leaves and you will be removing developing Encarsia from the crop before they hatch. If the plant leaves have to be pruned, check for the presence of black parasitised whitefly nymphs. If present, keep the leaves on the floor for 2 weeks to allow the emergence of new parasites.

Encarsia should be hung in the crop as soon as they are received. However, if you are unable to distribute them immediately, cards can be kept between 8-12°C for 1-2 days.

Encarsia is sensitive to many pesticides, particularly pyrethroids, organophosphates and neonicotinoids. Residues on foliage and greenhouse structures may remain toxic for many weeks and negatively impact on their survival and ability to effect control. Check side-effects charts carefully and avoid using pesticides before and during Encarsia use unless they are known to be safe. Contact Biological Services for specific information.

Orders are sent via express courier services on Monday or Tuesday of each week, and usually arrive within 1-3 days. Orders received after noon on Tuesday are sent the following Monday. Prices are on a sliding scale i.e. the more that is purchased over a monthly period, the less the price will be per unit. Freight is charged at cost. 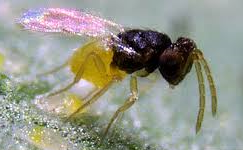