Orius tantillus (Orius) is a predator of various species of thrips, especially western flower thrips (Frankliniella occidentalis) and onion thrips (Thrips tabaci). Both adult and juvenile Orius feed on all stages of thrips including adults. In the absence of thrips, Orius can survive on aphids, spider mites, butterfly/moth eggs and pollen.

Orius go through 7 developmental stages in their life cycle which include egg, five larval (nymphal) stages and adult. The female lays eggs into the plant tissue of the stem, fruit, petiole and major veins on the underside of leaves. The eggs are almost completely embedded within the plant tissue and only the cap-like upper part of the egg is visible. Monitoring of egg lay should be carried out with the use of a hand lens. The development time from egg to adult can vary from 16-18 days at 25°C, to 12 days at 30°C. Females lay at a relatively slow rate of around 2-3 eggs per day, but adults live for 3-4 weeks. All life stages of Orius feed on live prey with adults being able to kill up to 20 thrips per day. When the pest population is high, Orius will kill more thrips than are required for their nutritional needs. Orius adults are competent fliers and can move through a crop quickly when searching for food. During the cooler darker periods of the day Orius will hide in flowers, leaf axils and on stems. They are more active in the middle of the day and leave orange dung spots on the white petals of capsicum flowers when feeding in the flower.

Worldwide, Orius species are used to control thrips in capsicum (sweet pepper) crops. Strawberry, and eggplant (aubergine) are also suitable. Crops that produce flowers with pollen, but where the flowers are not harvested are best suited to Orius. Crops such as roses grown for cut flowers, or cucumbers are not suitable as the Orius are not able to survive in the absence of an adequate pollen source. In these crops Orius needs to be established with the use of banker plants. Orius should be used in conjunction with Neoseiulus cucumeris, Hypoaspis aculeifer and Dalotia coriaria for increased control of thrips. Orius can be used in potted roses, where flowers are left on the plant, allowing the pollen to mature.

Orius are best introduced into crops preventatively, as soon as there are flowers with adequate pollen present to allow the population to build. It is recommended to release Orius into crops either early in the morning or later afternoon/early evening.

Orius are supplied in 500mL bottles containing 2000 adults and nymphs in buckwheat husks. To apply, gently rotate the bottle several times to mix the contents evenly, and then sprinkle over the plant heads, near the flowers. Try to ensure most of the buckwheat stays on the leaves. Each bottle should give about 50 release points to cover an area of 500-1000m².

Orius are best applied in two releases, one to two weeks apart. The first release of 2-4 Orius/m² should be made at early flowering, and then repeated two weeks later. If thrips pressure is high, release between 10-20 Orius/m² over the two introductions, depending on thrips numbers. As the season progresses, further releases or top ups in hotspot areas may be required, or in areas adjacent to neighbouring farms which suffer from high thrips infestations.

Orius is very sensitive to many chemicals, especially those with long residual actions, particularly pyrethroids, organophosphates and neonicotinoids. Residues on foliage or in the plant tissues may remain toxic for many months and negatively impact on their survival and ability to affect control. Check side-effects charts carefully and avoid using pesticides before and after Orius releases unless they are known to be safe. Contact your Biological Services consultant for specific information.

Orders are sent via express courier services on Monday or Tuesday of each week, and usually arrive within a couple of days. Orders received after noon on Tuesday are sent the following Monday. Freight is charged at cost. 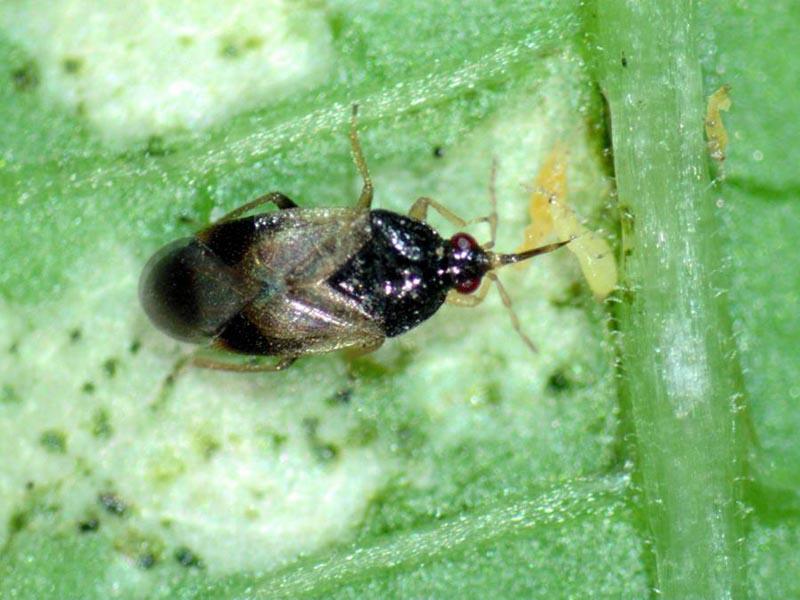