Typhlodromus occidentalis is a predatory mite which attacks spider mites, predominantly the two-spotted mite (Tetranychus urticae) but will also feed on European Red mite and Apple Rust mite. Adult T. occidentalis are similar in size to two-spotted mites. They are pear shaped with no spots or markings, and usually off-white, but their colour may vary with the type of prey they are consuming. Immature stages are mostly pale and translucent.

An adult T. occidentalis consumes 5-15 spider mites per day, and can complete a generation in 7-8 days at 25°C, whereas spider mites will take nearly 10 days. The optimum temperature for development is 27-32°C, but they can tolerate temperatures of over 40°C. They can also tolerate low temperatures, but become less active and may enter diapause (hibernate). This sometimes allows the T. occidentalis predators to remain established in the release area for many years.

T. occidentalis is well suited to tree crops in hot dry climates and is commonly used in apples and stone fruit. They are also tolerant to organophosphate and carbamate insecticides. They can be used in conjunction with Neoseiulus californicus which also tolerate hot dry conditions and a range of pesticides. Where conditions are mild (15-25°C) and humid, Phytoseiulus persimilis is often the preferred predator as it breeds faster and is more mobile.

The first introduction of T. occidentalis should be made at the first sign of spider mite activity. If the levels of spider mite are already high and there are few or no predators present a selective miticide may be required to reduce the pests prior to or after introduction.

T. occidentalis are delivered on bean leaves. There will be approximately 1-200 predators in active and egg stages on each tri-foliate leaf. Place leaves low down in the centre of tree in contact with foliage that is likely to have pest mites present. A second release is recommended approximately 2-4 weeks after the first release to ensure good establishment. Where predators establish readily and pest mite infestation is not heavy, good control can be achieved within 6-8 weeks. Releases over several seasons are recommended to ensure good orchard establishment. Known hotspots near boundaries or roadways and highly susceptible varieties should be inoculated annually.

Predatory mites should be released as soon as they are received. If they are not able to be released immediately, they may be stored at 4-8°C for up to 24 hours.

Do not use pesticides toxic to the predators for at least two weeks after the release date. If predators are present but the ratio is out of balance, use IPM rates of selective miticides to reduce pest mites and preserve your predators.

T. occidentalis tolerates many organophosphate chemicals and is resistant to azinphos-methyl. Miticides such as Apollo, Acramite, Calibre, Omite, Unimite, Torque and Pyranica are relatively safe to use, especially at IPM rates.

Orders can be placed by telephone, fax, post or email, and are sent via express courier services on a Monday or Tuesday of each week and usually arrive within a couple of days. Orders received after noon on Tuesday are sent the following Monday. Postage and handling costs are additional. Accounts are sent out at the end of each month, and can be paid by EFT, postal order, cheque or BPay. Freight is charged at cost. 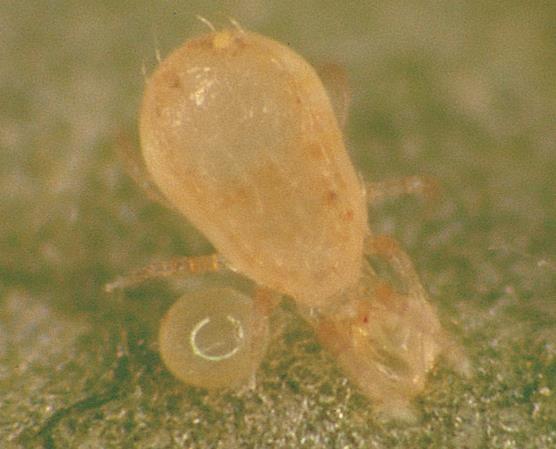