Aphidius ervi (Ervi) will parasitise a number of aphid species but is most commonly used to help control large aphid species such as Aulacorthum solani (foxglove or glasshouse potato aphid), Macrosiphum euphorbiae (potato aphid), and Acrythosiphum sp. (pea aphids), that are not parasitised by Aphidius colemani.

Ervi are black and about 4-5mm long. They look very similar to Aphidius colemani but are darker and slightly larger. Adult wasps resemble small winged ants but antennae are long and slender.

The parasite deposits an egg into the aphid in a matter of seconds. The aphid continues to move and feed after the egg has been deposited. When the wasp egg hatches, the Ervi larva begins feeding on the aphid, eventually killing it. The parasitoid develops within the aphid body which at this stage called a "mummy". The mummy looks like an over inflated bronze aphid. The Ervi then chews a hole through the back of the mummy and emerges as an adult wasp ready to deposit eggs in live aphids.

Complete development time is temperature dependent, but is about 12 days at 25°C. This is longer than the development time of aphids, but each Aphidius female can parasitize over 300 aphids in her lifetime which can last 2-3 weeks when food and water are available. Prolonged temperatures of above 30°C or below 8°C may reduce efficacy of the parasite.

Ervi can be used in all crops where susceptible aphids are pests. Ervi is primarily used in greenhouse production, but can also be used in outdoor crops to get parasitoids started earlier than would occur naturally. Crops that may benefit from Ervi include capsicums, eggplants, roses and other flower crops, a range of ornamentals, and some field crops such as lucerne, pulses and potatoes.

Ervi works best when used preventatively, or when aphids are first noticed in a crop. This parasitoid is very good at dispersing and finding low populations of aphids. If aphid numbers are already high it is advisable to use a non-disruptive insecticide to lower the aphid population prior to release. Residual broad spectrum insecticides should not be used for at least four weeks prior to the release of Ervi. Where several aphid species are present or you are not sure which aphid species is present, you can release Ervi in conjunction with Aphidius colemani and Aphelinus abdominalis which will cover many species of aphid pests.

Ervi are sent as aphid mummies in a small vial. Each vial contains approximately 250 mummies. When they arrive some adults may have emerged. They should be released as soon as possible. If they cannot be put into the crop immediately they can be stored at 8-12 °C for a day.

Rates will vary depending on the species of aphid targeted and the level of infestation at the time of release. The following rates have been determined overseas for the control of Aulacorthum solani and Macrosiphum euphorbiae in greenhouse vegetables and can be used as a guide.

Ervi is sensitive to many pesticides, particularly pyrethroids, organophosphates and neonicotinoids. Residues on foliage and greenhouse structures may remain toxic for many weeks and negatively impact on their survival and ability to effect control. Check side-effects charts carefully and avoid using pesticides before and during Ervi use unless they are know to be safe. Contact Biological Services for specific information.

Orders are sent via express courier services on Monday or Tuesday of each week, and usually arrive within a couple of days. Orders received after noon on Tuesday are sent the following Monday. Prices are on a sliding scale i.e. the more that is purchased over a monthly period, the lower the price will be per vial. Freight is charged at cost. 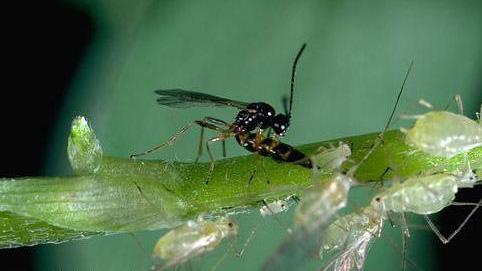