Aphelinus abdominalis (Glasshouse Potato / Aphelinus) is a parasitoid wasp which attacks over 200 species of aphids. It is primarily a parasitoid of larger aphids (Foxglove aphid - Aulacorthum solani, Potato Aphid - Macrosiphum euphorbiae, and Green Peach Aphid - Myzus species) but is also a significant predator.

Aphelinus are about 3mm long and black with a yellowish-brown abdomen. The legs and antennae are relatively short. Although winged, they are not strong fliers. Males are slightly smaller and darker (50:50 ratio). The female lays eggs singly into mid age nymphal stages of target aphids. The egg hatches after 2-3 days and the larva feeds on the aphid without immediately killing it. At 20°C, it pupates after 7 days and transforms the aphid into a distinctive black 'mummy'. Mummies first appear 2-3 weeks after introduction. The adult wasp chews a rough exit hole in the back to emerge 8 days later. Oviposition starts after 3-4 days. Direct killing through predatory feeding on non-parasitised younger nymphs, is also significant. Aphelinus has a relatively long life and oviposition period of several weeks and can lay 5-10 eggs/day. Aphelinus is better able to withstand high temperatures than Aphidius species.

Aphelinus can be used on all crops where aphids are present. It is primarily used in greenhouse production, but can also be used in field crops. Suitable crops include vegetables (capsicum, tomatoes, eggplant), ornamentals (gerbera, chrysanthemum, rose), nurseries and herbs. It is most effective where host aphids for parasitisation are present.

Aphelinus works best when used preventatively, or when aphids are first noticed in the crop. It is not a good disperser so needs to be placed near aphid colonies for maximum efficacy. If aphid numbers are already high it is advisable to use a non-disruptive insecticide to lower the aphid population prior to release. Residual broad spectrum insecticides should not be used for at least four weeks prior to release. Where several aphid species are present or you are not sure which aphid species is attacking the crop, release Aphelinus in conjunction with Aphidius colemani and Aphidius ervi.

Aphelinus are sent as aphid mummies in a small vial. Each vial contains approximately 1000 mummies. When they arrive some adults may have emerged. Aphelinus should be released as soon as they are received. Open the vial in the greenhouse. Tap the vial lightly to distribute the adult parasites and pupae evenly over the affected areas. Finish by placing the open vial horizontally at the base of infected plants for remaining adults to emerge.

Rates will vary depending on the species of aphid targetted and the level of infestation at the time of release. The following rates have been determined overseas for the control of Aulacorthum solani and Macrosiphum euphorbiae and can be used as a guide.

Aphelinus can be stored for a few days at 8-12°C if necessary.

Aphelinus is sensitive to many pesticides, particularly pyrethroids, organophosphates and neonicotinoids. Residues on foliage and greenhouse structures may remain toxic for many weeks and negatively impact on their survival and ability to effect control. Check side-effects charts carefully and avoid using pesticides before and during Aphelinus use unless they are known to be safe. Contact Biological Services for specific information. 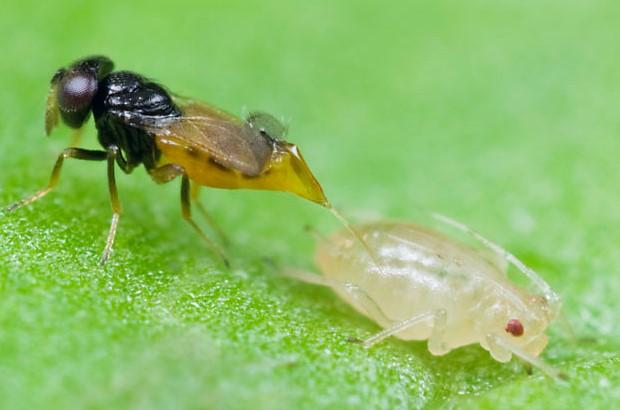