Scale insects are members of the order Hemiptera, which are characterised by mouth-parts with a proboscis, capable of piercing plant tissues and sucking out the liquids – typically plant sap. Scale insects are in the same family as aphids, whitefly and mealy-bugs. Scale insects have a waxy protective cover, which may be a hard cover (armoured scales) as in the case of red scale, (also known as citrus red scale or Californian red scale), or a soft cover as in the case of soft brown scale (soft scales).

The female red scale produces a yellow crawler stage that is just visible to the naked eye. Females can produce up to 150 crawlers over a 6-8 week period. The crawlers emerge from under the edge of the female’s cover and look for a suitable feeding site on the host. Young crawlers can be blown around from host to host by the wind. Once a crawler finds a suitable feeding site, it settles onto the plant, inserts its mouthparts into the plant, and starts feeding on the plant sap. At this stage, it produces a white waxy cover known as a “whitecap”. After feeding for some time the insect moults and the cast skin is attached to the scale cover, giving the scale its typical red colour.

After a second moult, the sex of the scale can be determined. Male scales tend to be more elongated than female scales, which are more circular. Males develop through a pre pupal and pupal stage beneath the scale cover before emerging as a tiny winged insect. Males are attracted to females via a pheromone produced by the female. Males then mate with the female scales and then die without feeding. There can be as many as 6 generations of scale per year, depending on location. In Mediterranean climates 3-4 generations per year is typical. 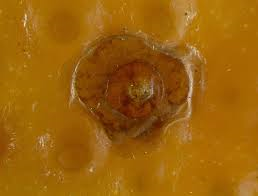