The chicken mite (also known as poultry red mite, red fowl mite, red poultry mite, roost mite) is a parasite that occurs world wide and can infest both domestic and wild bird species. It has also been known to attack humans and recent evidence shows it can complete its life cycle on humans as well.

Chicken mites mainly affect laying hens. Adult female mites lay their eggs in hiding places such as cracks and crevasses in hen houses and enclosures. Four to eight eggs are laid at a time, up to a total of 25 during the mites life time, and usually hatch 2-3 days after being laid. The hatched larvae do not feed, but molt into nymphs 1-2 days later. Nymphs need to have a blood feed and after several moults, they become adults (approx. 4-5 days). The mites favour hot humid conditions and in these situations, mites can complete their life cycle in as few as 7 days. Adult mites live for up to 8 weeks but are able to survive for up to 5 months without feeding. In cooler temperatures, development of the mites slows down and is almost stopped at 9°C. Because of this, mite problems are usually more prevalent in the summer months on birds kept outdoors, but can be all year round on birds kept indoors.

Adult mites can grow to 1mm long and are a white/grey colour if they have not yet had a blood feed, or are dark red after a blood feed. Mites generally feed at night time, and after a blood feed, mites will leave their host and hide in cracks, hollow places on roosts, feed troughs close to the birds. Mites will often be found clustered in these areas, and may number in the thousands. When population numbers get very high, the mites may feed on birds during the day as well as the night. Mites are generally found around the beak, ears, back, legs and breasts of birds. The mite bites cause itching and inflammation of the skin and when infested, skin on the birds legs may become, crusty and scaly. When infested, birds will often scratch and bite at themselves, causing injury and feather loss. Severe blood loss can cause anaemia and even death. Decreased egg laying in poultry houses can occur and infected birds become more susceptible to other diseases. 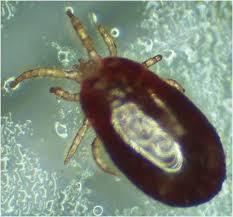