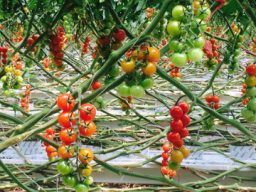 Often misunderstood as ‘chemical-free’, Integrated Pest Management (IPM) is where natural predators and parasites serve as the first line of defence against crop pests in combination with other controls. Chemical intervention is used as an occasional back-up.  In the northern Adelaide plains township of Virginia, P’Petual Farms has long been finetuning their IPM programs to enhance production of their tomatoes, cucumbers and eggplants all year round under cover.

“We’ve been dabbling in IPM for more than 20 years, but in the early days it was hard to establish an effective program,” said Head grower, Andrew Potter. “We’d have a beneficial for one pest but didn’t have one for the next. There wasn’t the range of beneficials available. Our only option was to run a scouting program and spray chemicals to control the pests when we needed to.

“We wanted to move away from that. It’s not sustainable and consumers are demanding safer food. We also wanted to grow harvest-intensive crops that we could pick 7 days a week, which isn’t possible when using chemicals to manage pests,” Andrew said.

Biological Services now has a good range of products for key greenhouse crop pests such as two-spotted mite, thrips, aphids and whitefly.

The commercialisation of Nesidiocoris tenuis in 2013 by Biological Services was a gamechanger in controlling whitefly in tomatoes. Whiteflies are becoming an increasing problem due to chemical resistance and there are less new whitefly sprays coming onto the market.

Nesidiocoris tenuis, widely used in the southern Mediterranean, is notable as a highly effective whitefly predator once well established. It feeds on all growth stages of whitefly including adults and on other pests such as two-spotted mite, thrips, moth eggs and young caterpillars. 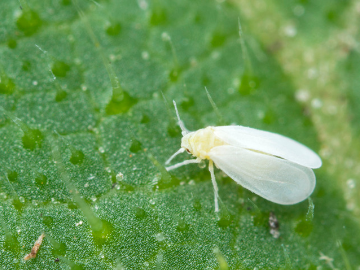 Good whitefly control has now lowered the pest population on many farms and allowed growers like P'Petual to confidently expand their tomato production.

“We’ve worked with Biological Services to establish a resident population of Nesidiocoris tenuis in our tomato plants before the whitefly appears. Once you start releasing, the beneficials keep breeding so they’ll always be there. Sometimes we only need to release them once,” said Andrew.

“Importantly, we can harvest 7 days a week now. Unlike with chemicals, workers don’t need to step out when the bugs are released and there are no withholding periods. We’ve added six new glasshouses to our existing six greenhouses in the last five years. IPM has been very positive for us and we’re now fully dedicated to beneficials farm-wide in all of our crops including cucumbers and eggplants,” Andrew said.

“Without the use of Nesidiocoris, some growers might have to spray weekly up to 50 times per crop cycle to control whiteflies. Instead, growers running successful IPM programs in greenhouse tomatoes might only need to spray for whitefly a few times over the 12-month cropping period,” said Lachlan. “It’s critical to maintain beneficials through winter and spring when conditions are cool, as this is when the whitefly population often gains a foothold.

“We generally recommend growers release Nesidiocoris two to three weeks after planting tomatoes or eggplants. While Nesidiocoris are establishing we release the whitefly parasites Encarsia Formosa and Eretmocerus warrae weekly. This helps to control the juvenile stages of whitefly and reduces whitefly pressure during the cooler months when Nesidiocoris are slowly establishing due to the lower temperatures.

“Our aim is to build a resident population of Nesidiocoris. As the weather warms they breed much faster and bring the whitefly levels down. The amount of chemical sprays for whitefly is then reduced. One drawback is that Nesidiocoris can feed on the plants. When pest levels are lowered and hotter conditions prevail, they will seek moisture from the plants. Some plant varieties are more sensitive than others.

“Monitoring is therefore critical to decide whether Nesidiocoris levels need lowering. This may be required several times over summer. Biological Services Consultants across the country can help growers effectively monitor and reduce the population if needed," Lachlan said.

Andrew's advice to other growers

For growers considering adopting IPM, Andrew Potter has this advice:

“It’s important to consider your current practice and tell the Biological Services team what you’ve been spraying,” he said. “Some chemicals have long residues. You might need to plan your transition to IPM so that the residues don’t harm the beneficials when they are introduced.

“In the long term, I see only benefits of moving to IPM. You won’t get pests that are resistant to chemicals so you should always be able to control them, and the beneficials will keep working for you if you manage them well.”

To learn more about how to control whiteflies in tomatoes or to understand what’s involved to implement or extend an Integrated Pest Management approach on your farm, contact the Biological Services team on 08 8584 6977 or by email.