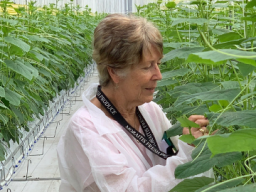 Field-work unearths a past discovery and a promising new weapon against thrips, whiteflies and mites for Australian growers

Twenty years after we first tried to commercialise it, a chance discovery and more advanced techniques have put a native predatory mite back under the microscope. If our current trials go well, we could launch a new product as soon as next month.

Often in science, technology needs to evolve before the benefits of new discoveries can be realised. It’s a truth we were reminded of when recent field-work led to the re-discovery of a potential new weapon in the fight against thrips, whitefly and mites – Typhlodromalus lailae – a predator we first tried to commercialise 20 years earlier and which is now the subject of field trials.

T.lailae is a native Australian predatory mite naturally present in many mild, humid, coastal and hinterland districts. In 1998-2000, NSW Agriculture entomologist Marilyn Steiner, first recognised its potential as a biological control agent for greenhouse cropping, due to its voracious appetite for thrips, whiteflies and some eriophyid mites.

While the Biological Services team attempted to act on this discovery at the time, it was not yet possible to raise sufficient quantities of T.lailae to make it commercially viable, and it fell off the radar.

However a chance re-discovery of T.lailae re-ignited interest in Marilyn’s work.

“Our consultants are always looking in a range of crops for beneficial insects and mites that are naturally present in regions across Australia” said James Altmann, co-Director of Biological Services.

“Of particular interest over the past 2 years has been a predatory mite we observed in many districts, including south-western Western Australia, the Adelaide Hills, Tasmania, Yarra Valley and Coffs Harbour.

“It was difficult to get a colony of the mite started initially, but thanks to the persistence of our R&D team, we developed a viable method in August 2018. In September, we sent samples of this culture to Dr Jenny Beard, a mite taxonomist at the Queensland Museum. A month later – to our surprise – Jenny told us the predator we had in our culture was T.lailae.

“What we couldn’t achieve 20 years earlier when we first attempted to breed T.lailae, was now possible as our facilities and skills have advanced. We are now running active field-trials to test whether the mite could become a new option for commercial growers in mild/humid regions of the country and in greenhouse-grown crops,” James said.

Trials in a range of crops are showing establishment of T.lailae and its ability to feed on a range of pests. The mite is closely related to T.limonicus, an important predator used in Europe for thrips and whitefly control in greenhouse vegetables, flowers and ornamental crops. Our team expects our native mite to behave similarly in its ability to control pests and operate in similar conditions. Dr Jenny Beard is investigating the possibility that T.lailae and T.limonicus may in fact be the same species.

Optimum temperatures are likely to be 15-30OC but T.lailae can continue breeding at 7-8OC, and can survive zero degree temperatures. This makes it a good candidate for overwintering in outdoor crops. The mites do not like very hot/dry environments but will persist at higher temperatures if humidity levels are good.

Trials have commenced across the country.

Paul Horne of IPM Technologies is also trialling T.lailae for Tomato Russett Mite and other pests in ornamental plants. Dr Steve Quarrell (Tasmania) and Cindy Edwards (Victoria) are looking at Red Berry Mite and Broad mite control in blackberry and raspberry crops. A trial is also being undertaken on capsicums in WA to test the effectiveness of T.lailae on Tomato Potato Psyllid (TPP), as previous research in New Zealand shows that T.limonicus feeds on the eggs of TPP.

Fittingly, the trial phase is being supported by the person who first recognised the potential of T.lailae around the turn of the millennium.

“When we discovered we had T.lailae in culture, we got in touch with Marilyn Steiner. We managed to coax her out of retirement and she is monitoring a commercial trial in her area – a crop of cucumbers at Family Fresh Farms in NSW for thrips and whitefly control.

“It still early days, but the mites are establishing and we hope to have preliminary results soon. If successful, we could have an exciting new product available as early as next month,” said James.

Growers and industry groups can register your interest in the progress of T.lailae trials, by contacting us today.