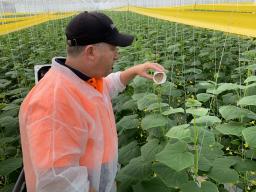 From a promising field observation, to the chance re-discovery and successful trial, the effective inclusion of Typhlodromalus lailae (Lailae) in a new IPM program to control greenhouse pests has been twenty years in the making.

Potential benefits of new predators in Integrated Pest Management (IPM) is often observed many years before growers can realise them. This was certainly true for Lailae, an indigenous mite which is now being successfully used to help control Western Flower Thrips, and both Silverleaf and Greenhouse whiteflies in greenhouse crops such as cucumbers and capsicum.

While entomologist Marilyn Steiner first recognised the potential of Lailae in 1998, it was only recently that Biological Services was able to rear sufficient quantities to make it commercially viable.

“Lailae is an indigenous predatory mite that is naturally present in many mild, humid, coastal and hinterland districts of Australia. From Marilyn’s early observations, we believed Lailae could have significant benefits in pest management in commercial greenhouses and we’ve twice tried to commercialise it,” said James Altmann, co-Director of Biological Services.

“We found it difficult to sustain colonies of the mite when we first looked at it twenty years ago. We tried again and in August 2018, our more advanced methods and R&D capabilities made Biological Services the first to develop a viable method of rearing Lailae in the lab,” he said.

Bringing a new IPM method to growers is about more than rearing mites however. Recently completed 15-month trials by Biological Services in farms across Australia has allowed them to test the number of mites needed and the ‘when, how, and how often’ to release.

Among the trial sites was Family Fresh Farms in New South Wales.

Senior grower, Wade Mann (featured picture), oversees the IPM strategy across the farm’s 5-hectare cucumber operations. He is a long-time advocate of relying less on chemicals and was keen to be involved.

“My experience as a grower spans roses in Zimbabwe to cucumbers in Australia. When we first arrived from overseas, the first thing we did was research what beneficials were available here because I have always been against relying solely on chemicals,” Wade said.

“I’ve worked with James (Altmann) for a long time and know him to be very approachable, knowledgeable, open and honest. Biological Services provide ‘fresh’ and superior quality beneficials and service so we were delighted to be part of the trial,” he said.

The trial at Family Fresh Farms was supported by Marilyn Steiner, who Biological Services coaxed out of retirement to monitor the effectiveness of the mites she first identified. Starting with just a few rows and using another known beneficial (Cucumeris) on the rest, Lailae quickly had an impact on thrips but then something unexpected happened.

“Once we got going, we could see the thrips were being managed well by Lailae. Within a few weeks of starting the trial, whitefly also appeared and started to build up in some areas,” Marilyn said. “Then suddenly, the Lailae colony took off. We realised it was because they had another food source in addition to the thrips. The Lailae  were feeding on and controlling the whitefly as well, and built up into high numbers very quickly.”

The trial established that releasing both Cucumeris and Lailae together on planting day was most successful. Biological Services now recommends a release of this combination 3 times about 2 weeks apart. This method has been successful in controlling thrips and whitefly for more than 8 months, almost entirely without pest sprays in eight consecutive crops. Cucumeris can be applied in high numbers quickly and economically from day 1 to protect against initial pest levels. Lailae takes a little while to establish. Having good numbers of Cucumeris in the crop early, and the prey mites they feed on, actually helps Lailae to establish and breed up.

Biological Services says the trial was a collaborative effort and is grateful to the growers across Australia who took part. In the case of Family Fresh Farms, Marilyn attended every week for more than 6 months to check on Wade’s method of releasing the beneficals, to discuss observations and report back to James so he could adjust the program.

In the cucumber program, growers also use Aphidius colemani for aphid control, and Persimilis introductions for Two Spotted Mites.

“Where conditions suit, Lailae is the most powerful predatory mite we have ever worked with. We have gained some good results in cucumber, capsicum, blueberries, blackberries and some ornamentals,” said James. “The willingness of all growers in supporting the trial was key to now being able to offer our new commercial product. We’re passionate about reducing the use of chemicals in food and ornamental production systems and working with growers to help them respond to market demand.”

“Chemical residue levels are becoming a sticky point with consumers,” Wade said. “With IPM, you don’t have to worry about release time or withholding periods, don’t have to evacuate the site or generally worry about the safety of our people. It makes sense, especially with more and more audits from supermarkets to check chemical use. Releasing beneficials is no drama and it’s something I definitely promote to everyone.”